Take your adventure to the High Seas

Reviews from our listeners:
""Amazing game! The sound effects made it so immersive. Is really hard to find a 7th sea campaign so good as yours."

"OMG... just came across this and the intro had me at start
"Why would an international assassin who kills people with a pencil write it?"
"Everyone needs a hobby."

"Quite enjoying it...all the talk of witches and sorceresses (they are bad til you want them to save you lol - love the RP)"

"I hope others listen to this too - I just started and it looks like you have a bunch of genres to enjoy and you all could be voice actors.... so good"
​Swashbuckling and sorcery. Intrigue and corruption. Choices and exploration. Is it more dangerous to navigate a ship through stormy seas or try to navigate court politics? Is it better to tackle conflicts with weapons or words?

7th Sea does a remarkable job of not letting its huge setting make players feel small, although set against the vastness of the ocean and the tangled political webs of many countries, heros have an impressive amount of control over the narrative.

We invite you along for a voyage that could take us almost anywhere, from creaking wooden ships and the smell of salt air, to ballrooms where only the cream of society are invited to dance, to small villages with small problems that mean the world to their inhabitants, to groups that pull the strings from the shadows and manipulate the world. We don't know where we're headed or what will happen on the way but we hope you'll join us!
The continent of Theah sits surrounded by six seas. Sailors whisper of a seventh but that is considered little more than folklore. While Theah consists of several nations, all of them can trace their recorded history back to one place: Numa, the first city. The first human city that is, for there were others before. Ruined cities and strange artifacts are all that remain of the Syrneth, those who came before, whose powerful grasp of magic and technology was not enough to prevent... whatever led to their sudden disappearance. Their impact on the world is still felt in the struggle to claim the powerful items they left behind.

Numa, the first human city, first prospered, then became corrupt, and finally fell. From its ashes the Numan Empire was born, however this was not a peaceful change and several families who had been in power previously while the city was a republic used Syrneth artifacts and made pacts with powerful entities, thus becoming the first sorcerers. War raged until at last a pact was able to be made, each noble family being allowed to claim a territory of the empire for their own, thus dividing Theah, as long as they acknowledged the rule of the Numan Imperator, who at this point had little actual power as that was back in the hands of the Senate.

And so there was peace for 50 years. Then came the First Prophet. A stranger came before the Senate claiming to be the prophet of a god named Theus, the creator of the world, and decrying sorcery and those that practiced it as an abomination. A cult sprung up around him, and he gained enough influence to be a threat to the Senate who arrested him as a criminal. He was executed, but not before predicting that three more prophets would follow.

Even after the prophet's death his cult continued to grow. 200 years years later it was so powerful that the Imperator declared it the one true faith, and the Senators were banished to outlying regions. As the empire too continued to grow, it fell to the same ruin as the Republic it followed, becoming corrupt and collapsing two centuries after the Senators were banished. This began the dark age of Theah, and it was during this time that the Second Prophet appeared. He began the Crusades, waging war against sorcery in all its forms. He lost his life in the very first crusade, but the Third Prophet emerged and continued preaching of the evils of magic, a belief the prophets had managed to instill in many.

The Third Prophet vowed to rid Theah of magic once and for all, allied with the power of the Vaticine Church and conquered the nation of Castille, throwing out it's ruling family who were users of sorcery. He planned to move on to the other nations still ruled by the noble families who had been banished hundreds of years before, but there was no need. Vodacce rebelled against its nobles and removed them from power, while the Montaigne nobles agreed to give up their magic to retain their rule. The Third Prophet reorganized the Vaticine Church, prophesied the coming of Fourth Prophet whose appearance would mean the end of the world, and vanished never to be heard from again.

Today the different nations of Theah engage in politics, commerce, conflict, and a healthy dose of intrigue, all touched by the shadow of their history. Castille hosts the Vaticine Church and its Inquisition dedicated to fighting sorcery and is ruled by a child king struggling to hold the nation together. Montaigne is made up of decadence loving nobles and the common people who suffer for their opulence, and ruled by an emperor who has revealed Montaigne never truly gave up their use of sorcery. Avalon, a place whose history is more legend, is inhabited not only by humans but the faerie folk called the Sidhe, technically three nations bound together as one it is ruled by Queen Elaine who holds the graal, an artifact that grants the sorcery of Glamour. Vodacce is a nation of intrigue, where power is held by extravagantly wealthy nobles and the fate witches, Vodacce sorcery is incredibly powerful and only usable by women. Eisen was once Theah's most powerful nation, until a civil war between their two biggest religions, the Vaticine and Objectionists, weakened the nation until Montaigne and Castille stepped in and put an end to it, both claiming large amounts of land in the process. Ussura is mostly overlooked by other Theans who consider it a vast, frozen wasteland, but it is stable and it's people live good though hard lives. The Vestenmannavnjar and Vedel inhabit islands to the north of Eisen, the former those who still maintain the traditions of that land and seek to protect their heritage and the latter those of the merchant class who have changed to better appeal to the Southern nations for monetary gain.

Outside of every nation are the pirates, although in a sense they have a nation of their own. The Pirate Nation is a loose collection of the pirates of Theah, almost every major pirate group is represented. Pirates care little for the politics of Theah, until one nation or other decides to try and rid the seas of them, at which point they call on their alliance and fight back. 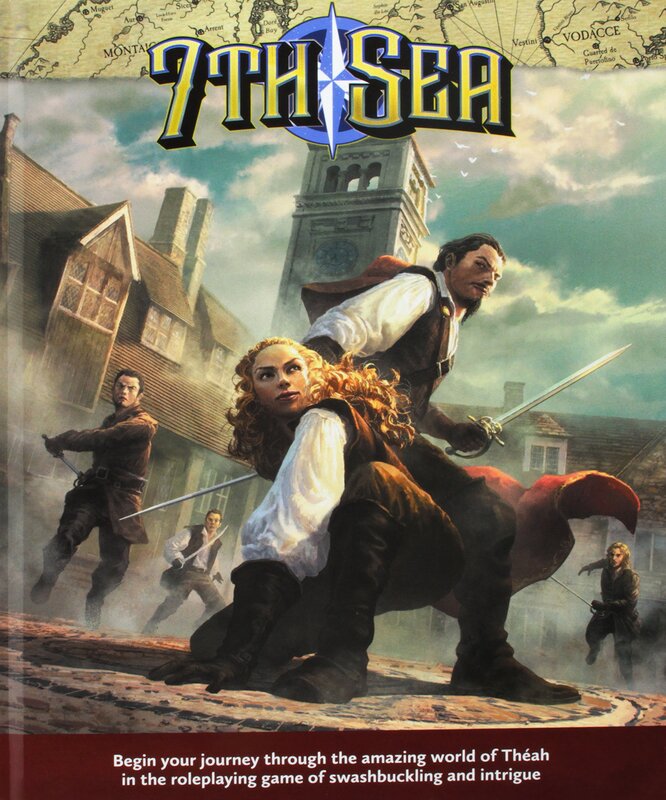